For Talitha Groenewold, engineering might not have been in her blood, but it definitely aroused her curiosity and eventually inspired her to pursue her current career. Now she is actively working to show the brightest young minds, with special attention to women, that engineering opportunities are available for everyone, particularly at Sandvik.

“It is really important for me to show young students what opportunities are there for them, no matter what their backgrounds or genders are,” says Talitha Groenewold, automation applications engineer, Sandvik Mining and Rock Technology. “Because the one thing I’ve noticed is that there are a lot more women today pursuing study programmes in math, science, engineering and technology. And it hasn’t always been this way.”

It wasn’t even that way for Groenewold, who as a teenager saw herself as a researcher within the biomedical industry.

“I ambitiously wanted to find a cure for cancer,” she says, “until I realized I wasn’t so good with blood.”

The native of the Netherlands reevaluated her potential future. She took some tests to help narrow down her selection and realized that the top ten choices they advised were all engineering related.

“Once I realized how much I liked math and physics, I started looking into engineering as a possible path,” Groenewold says. “But it had to be more than general engineering. It had to speak to me.”

At some point, her curious mind found Applied Earth Sciences, the happy marriage of engineering, geology and the large-scale structure of the Earth’s interior. On a subsequent get-to-know-your-studies trip to a lignite mine in Germany, Groenewold found herself blown away by the sheer size and scope of a bucket wheel excavator, equipment that can reach dimensions of 96 metres tall and 225 metres wide, and has not looked back since.

“Before that trip, it was a toss-up between Aerospace Engineering or Applied Earth Sciences,” remembers Groenewold, “but after that visit I decided on getting my master’s degree in mining engineering.”

In 2012, Groenewold started her studies at Delft University of Technology in the Netherlands, during which time she arranged trips to mines and various lectures in her active role within the study association. During her studies, she even visited the Sandvik facility in Tampere, Finland. When it came time to choose where to do her master’s degree, she chose the European Mining Course, splitting time between Aalto University in Helsinki, Finland, RWTH Aachen in Germany and Delft University of Technology in the Netherlands.

“For me, that was some of the best times of my life,” she says. “Studying with 14 other students, travelling Europe, learning about mines, having fun.

“My main motivation, though, was to finish up university with as much applied knowledge as possible to make my mark, particularly in this industry with so few women. In the mining world, you sometimes have to deal with old biases because of your gender and those that don’t believe you’re suitable for the industry because it’s too rough. But I always knew it was for me and that I wanted to pursue it.”

And she did. By 2018, Groenewold was looking for her master’s thesis just at the same time that business unit automation at Sandvik Mining and Rock Technology was looking for a master’s student.

“Mining can be a very conventional industry,” she says. “In our department, we’re very focused on innovation and on digitalizing and automating the industry. They needed a mining engineer to get a clear picture of how efficiently mine sites were working, and I thought it was super interesting.

Today, Groenewold and her partner live in Tampere, Finland, not far from the Sandvik test mine. In her current role as application engineer, she is tasked with gathering more knowledge on how Sandvik products are implemented on the mine site. 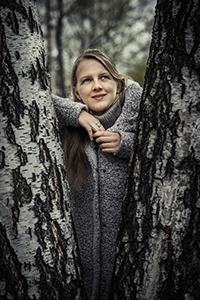 Groenewold is tasked with gathering more knowledge on how Sandvik products are implemented on the mine site.“Mine sites are really complicated places; kind of like controlled chaos,” she says. “And it can be challenging to apply a product in such a complex environment. And while we have a good understanding of what we want our products to do, it’s essential to get information and data on the actual situation at the mine site. It’s my job to see what challenges we and our customers face and find some potential solutions for the long term.

“Sandvik is such an overwhelming and impressive place to work,” Groenewold says. “I enjoy it because it’s such a diverse environment. It challenges me to think further than just my own industry and focus. I feel like I have the freedom to form my own personality and create my own position in my professional life.”

Increasing the diversity at Sandvik is on Groenewold’s to-do list. She hosts graduates from her alma mater to show them around the test mine and facility, and makes it her goal to try and inspire young students, with special attention to women, to follow their love of engineering to Sandvik.

“Sometimes people see a woman first and then they learn you’re an engineer,” she says, “and that can be very frustrating. I love showing engineering graduates, especially women, how diverse our company is and how cool it is to be a woman in this industry.

“There is so much change happening, especially in the world of digitalization and automation, there are a lot of opportunities for women to make their mark.”

Hobbies: I love being outdoors – running, cycling and especially doing water sports like sailing and surfing

Family: Only child, very close to parents in Netherlands. Living with partner together in Tampere, who has also started working at Sandvik.