Financial Times has appointed her one of the most influential women in Engineering in the UK. She is also an appreciated Board Member of Sandvik. Meet Jennifer Allerton.

Financial Times, together with Inclusive Boards, has selected the 100 Most Influential Women Leaders in Engineering in UK, published in the special section ‘Women in Business’. Sandvik Board Member Jennifer Allerton was honored with a place on the list, and in this interview she shares her thoughts around the award and around ways forward for Sandvik and the Industry.

Congratulations! What does a recognition like this mean to you?

“For me it is something that can bring awareness to a broader public of what women in engineering can, and already have achieved. I think it is important to show that engineering can lead to a really interesting and fascinating career, where you make a difference in people´s lives and in society. A lot of the solutions to our current climate change issues will come from development made by engineers. Electric and hydrogen powered cars, wind and solar energy, plant based food, carbon capture – the list is endless,” Jennifer Allerton says.

She stresses the fact that as an engineer, you can look forward to a life long learning path.

“I have had to relearn everything I know about technology every third year, meaning you never get bored and you are always learning. I would certainly encourage women to go into engineering as a career.”

During your years in business in general, and in Technology in particular, what changes have you experienced when it comes to the attitude towards women in business?

“When I started in IT about 40 years ago it was a new industry, the technology was brand new and it was about 50/50 men and women going in to the profession. There were no preconceptions about who was good at IT and companies were open minded. As long as you could pass an intelligence test you could start a career in IT.” 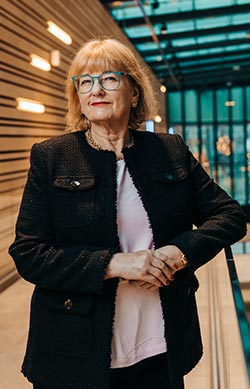 “About 10 years later when I looked around, I asked myself – where have all the women gone? Many women took a career break, having children, and because things were moving so quickly it was difficult to come back in. At the same time companies were not helping with flexible working, child care facilities or other support.”

“Then, when I retired from my executive role and decided to have a career as a Board member it was unusual to have women on the Board, specifically with a technology background. Today women in the Boards are more common but more women are needed as CEOs:s and on the executive teams. That´s important because study after study during the last 10 years has proved that diversity and thought leadership drives business performance.”

What is the best way forward to achieve better gender balance in management teams in your opinion?

“I actually believe that women in general have better skillsets to run global businesses; they communicate better, they don´t play politics, they understand people and they have often been caretakers in their family. You don´t have the advantage of being able to fire your family members, you have to make it work, so if you can run a family, you can probably run a business.”

“What is important is to create a level playing field so that women can perform on the best of their abilities. That takes flexible working conditions, predictability at work and inclusion. You can´t have ´casual sexism´ at work or unconscious bias, that can not be tolerated if you want to create an environment where people can flourish.”

“Studies show that you need about 30% representation in a group before you stop feeling like a minority. Meaning it´s not enough to appoint one woman and think it´s done, you have to appoint at least 30%.”

Gender diversity is one important part of the larger sustainability agenda in a company. If you put your experienced “engineer-glasses” on, what role do you see companies like Sandvik playing in making a contribution to a more sustainable world?

“Sandvik has a huge contribution to make. We have stepped up to the challenge and I´m really excited about the new Sustainability targets that we have adopted. By publishing them and by measuring progress we will make them happen. Engineers always say; what gets measured, gets done. That’s why I think we have been quite brave to publish those challenging targets when it comes to circularity and the other focus areas.”

“I was very excited and honored when I was asked to join the board. Sandvik has a terrific reputation for being one of the great engineering companies in the world – recognized for great customer service, which was something that became loud and clear when I asked around among peers before I joined.”

“Today, my impression has only become stronger. The people in Sandvik is what makes the difference, there are so many incredibly passionate people who enjoy their roles and want to succeed and have a long career in the company.“

Looking at your other current Board assignments and your former management positions, digitalization and information technology is a red thread. How do you as a Board Member see Sandvik best taking advantage long term of the opportunities from the digitalization that now happens in the industries we are in?

“Boards typically make an impact over 3–5 years and since 2015, when I joined, we now start to see results from the decisions we made; the decentralized decision making is closer to the customers, the balance sheet is repaired and brings financial firepower to refresh our business portfolio and we have great scorecards in place.”

“When I look to the future and to new technology it comes in so many different areas. 5G will have a huge impact, enabling driverless cars for example. But we must make sure we don´t adopt technology for technology´s sake. It has to be because it makes the customers more efficient or the world more sustainable. At the end of the day, we all want to leave the world in a more sustainable way to our children and grandchildren.”

Living in a material world

Sandvik Board member since: 2015

Current Board assignments:
Board member of Iron Mountain Inc. and AVEVA Group plc.