Recently, 330 solar panels were installed at the Göranssonska Technical High School in Sandviken, Sweden, as a project for engineering students at the school. As soon as the panels are up and running, the electricity generated will be a bonus.

In Sandviken, 125 miles north of Stockholm, the past winter months have been dark and rainy. But on this day the skies have cleared and the sun shines brightly as students of Göranssonska Technical High School step out onto the roof to admire 330 brand-new solar panels.

Although the new panels will provide some 12 percent of the school’s annual electricity needs, the electricity is a bonus as the school already has a fossil-fuel free electricity supply. The point of the new installation is education.

School is in session

Sandvik is majority owner of the school that bears the name of Sandvik’s founder, Göran Fredrik Göransson. Mats W. Lundberg, Sustainable Business Manager at Sandvik Materials Technology, is the driver behind the project, which he began in 2017 in cooperation with the school’s management as a way to emphasize sustainability. Lundberg explains that the panels will be connected to all kinds of displays, enabling detailed m

Göranssonska Technical High School has installed 330 solar panels will provide some 12 percent of the school’s annual electricity needs.easurements and advanced student projects on solar energy. “We want to make sustainability more than a buzzword,” he says.

Moa Karlsson, one of the students standing on the roof, says, “There is so much talk about sustainability, and talk is good, but you want to work with it, live it. That is the best way to learn.” Fellow student Oscar Persson nods and looks at the panels. “This is for real,” he says.

The panels have clearly inspired other students to innovatively ponder solutions for the future. In his final year, student Alfred Kaskela explains that his thesis project was constructing a solar panel on wheels that could be moved around and tilted to different angles, allowing measurements to be taken on various factors that influence the panel’s ability to transform light into electricity.

There is so much talk about sustainability, and talk is good, but you want to work with it, live it

Becoming the change you want to see

The new installation will be up and running in spring 2020. On sunny days, the school will be able to rely almost entirely on electricity from the solar panels. Transformers in the school’s attic will convert direct current (DC) electricity from the panels into regular alternating current (AC), and special sockets will allow the school’s more than 200 students and staff to charge their cell phones solely from the sun. A downloadable app will show in real time how much energy the panels are generating. A switch allows the staff to turn off input from the panels in case of overload.

“The sun provides more energy than you would imagine, even on cloudy days, and summertime has an abundance of sun,” says Lundberg, an engineer and former teacher. Lundberg had previously installed solar panels at his home in Sandviken, despite skepticism from his neighbors. In the winter, it is not uncommon for Sandviken to have only 20 to 40 hours of sunshine per month. Lundberg checks his app daily to track how much electricity his roof is delivering.

Now, he says, “neighbors have started to rethink” and new installations are appearing in his neighborhood, spurred on by government subsidies and the cheaper cost of panels. According to Lundberg, the price of panels has dropped by a factor of 10 over the past decade. 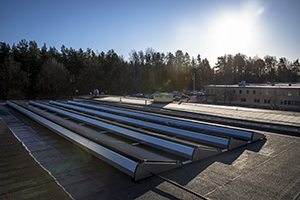 On sunny days, the school will be able to rely almost entirely on electricity from the solar panels.

The solar panel project, with all gear and instruments up and running, is due to be inaugurated in April. “Educationally, the project involves science, technology, economics, innovation and more,” says Lundberg. “Students can choose which angle to pick and base their studies on real and live facts. It is close encounters with impactful technology, rather than buzzwords, that enable young people to truly understand the opportunities and challenges involved in creating a sustainable world.”