Energy resource scarcity is a concerning issue. Around the world, companies are looking for opportunities to operate independently of the energy grid by generating renewable energy themselves, ultimately helping to meet the global demand.

“There is every reason to believe that society will continue to use more and more machines and devices, therefore consuming more electricity,” says Mats Alvem, Global Environmental Manager at Sandvik “Meanwhile, as we switch from cheap, accessible, traditional energy to green energy, there’s a real possibility that clean electricity could become scarce. This is why, apart from the obvious benefits in terms of corporate social responsibility and reputation building, companies are looking to secure their own electricity supply for the future.”

The self-generated clean energy trend began among B2C corporations about a decade ago. More recently it has spread into the B2B segment.

One of the trailblazers was Swedish flat-pack furniture emporium IKEA, which started placing solar panels on the roofs of its buildings in 2011 to help reduce its carbon footprint. In 2019, the retail giant announced its investment in two large solar power plants in the United States and a wind farm in Romania, in addition to the 900,000 solar panels and 500-plus wind turbines it already operates. By the end of 2020, IKEA aims to generate more renewable energy than it uses worldwide.


In 2017, Apple opened its Apple Campus 2 headquarters, nicknamed “the spaceship,” in Cupertino, California. Apart from providing state-of-the-art facilities for as many as 13,000 employees, the 175-acre campus is also home to around 75,000 square metres of solar arrays, which provide 75 percent of the building’s daytime electricity.

It is no coincidence that leading retailers such as Apple and IKEA were among the first to blaze the self-generated energy trail. The most immediate rewards from this kind of initiative, Alvem explains, are usually related to public relations.

“These days, consumer-focused companies are under more pressure than ever to differentiate themselves from the competition,” he says. “Taking responsibility for the environment and having a strong sustainability profile is good for your reputation and also helps attract talent to the company.” Securing access to clean, affordable energy also makes good business sense, he says.

“Installing your own energy production is a long-term investment that only starts to benefit the bottom line once the payback period has passed,” he continues.

Solar power is comparatively inexpensive and easy to install, unlike wind power, which involves huge investment costs and a complex regulatory landscape.

The average payback time on a solar panel system with a lifespan of 25-plus years is seven and a half years, estimates Boston-based online solar financing marketplace EnergySage.

“Payback varies a great deal, depending on the technology you’re using and where in the world you install it,” says Alvem. “It goes without saying that solar power performs better in Asia or Africa, where there is more sunshine than in, say, Sweden.”

Alvem emphasizes that the financial viability of renewable energy is heavily impacted by government policy, as more and more countries offer subsidies and tax rebates for measures that improve sustainability and reduce climate impact. “And while northern Europe might perform less well in the sunshine stakes,” he says, “governments in this part of the world tend to offer significant incentives for investments of this kind.” For Sandvik, the decision to invest in renewable energy was a no-brainer.

“Here at Sandvik, we see our environmental initiatives as both a fundamental responsibility and a business opportunity,” says Alvem, “and we’re continuously working to minimize the environmental impact of our operations. This is why it made perfect sense for us to become one of the early adopters of solar power.”

Sandvik installed its first solar panels in 2012, at its site in Alcester in the UK. Since then, it has invested in solar power or other forms of renewable energy at an additional ten sites. The largest of Sandvik’s solar installations can be found in Chiplun, India, where the maximum peak effect from solar energy is 409 kWp, or kilowatt ‘peak’. (A kWp is how many kilowatts solar panels will generate when working at maximum capacity for an hour.) Solar panels are also installed at the Harare site in Zimbabwe (100 kWp) and the Fair Lawn, New York site in the US (85 kWp).

Meanwhile, the Sandvik Coromant plant in Gimo, Sweden, has replaced oil with biofuels, thereby reducing its greenhouse gas emissions by 1,850 tonnes per year, equivalent to the energy use of 783 homes. 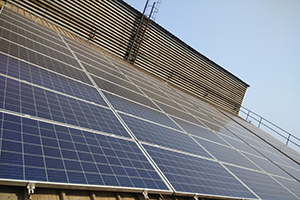 The rooftop solar installation at the Sandvik Chiplun, India, facility.

In 2018, Sandvik signed an agreement with energy company Nevel to build a biofuel boiler and fuel delivery system at Nevel’s nearby district heating plant.

“Between 2012 and 2018, we had already reduced our use of fuel oil by about 70 percent,” says Joakim Fagerudd, Site Manager. “Since implementing the alternative district heating project, we’ve brought that number down to almost zero.” Going forward, the Gimo plant is also looking into additional sustainability measures such as solar panels and the possible use of hydrogen.

A similar project is ongoing at the Sandviken site in Sweden, where residual heat from production will be used to heat industrial buildings. It will reduce oil and electricity purchases and the goal is to be independent of oil for heating by 2023.

Alvem points out that being sustainable requires companies not only to produce greener energy but also to consume less of it. “The No. 1 sustainability priority for Sandvik is being more energy efficient, because, at the end of the day, the best kilowatt-hour is the one you don’t use,” he says.

The ultimate objective is to use less energy and for that energy to be either self-generated or purchased from a sustainable source. At present, this can be more or less viable, depending on the country in which you are operating. For example, whereas more than half of the energy used in Sweden currently comes from renewable resources, the equivalent number in a far larger country like India stands at only 22 percent. Alvem argues that this is where companies that generate their own clean energy can start to make a real difference.

“I would encourage companies everywhere to have the courage to invest in renewable energy or set up long-term energy-supply agreements,” he says. “This is crucial to securing your own supply, while also contributing to a greener future for us all.”

The EU has set itself the target of obtaining 32 percent of its energy from renewable sources by 2030.