Electric vehicles (EV) are nothing new. What is new are autonomous electric vehicles that are produced on a massive 3D printer, then assembled by a small team of workers in a “microfactory”, a facility no larger than the nearest big box store. What’s more, these futuristic vehicles are often customized to the specific needs of the people or companies buying them.

Just like Olli, a shuttle bus that promises not only to change the face of transport as we know it, but also to revolutionize the way automakers everywhere design, produce and market their wares.

The driverless shuttle was introduced at the 2018 International Manufacturing Technology Show (IMTS) in Chicago, and the vehicle’s manufacturer, Arizona-based Local Motors, has a history of similarly audacious acts. At IMTS 2014, the automaker built the world’s first 3D-printed car – the Strati – on the floor of the convention centre. On the show’s final day, Local Motors founder Jay Rogers and Association for Manufacturing Technology president Douglas Woods took the car for a spin.

Since its inception in 2007, Local Motors has given us the Rally Fighter, the first co-created production car, as well as the XC2V (an “experimental crowd-sourced combat-support vehicle”), the Verrado electric-powered drift trike, and the “completely customizable” and co-created LM3D Swim roadster. Perhaps most exciting of all, it gave us the Domino’s DXP (stands for “delivery expert”), touted as the “ultimate delivery vehicle” for pizza. All were collaborative efforts, and all broke the mould of traditional manufacturing.

Yet this story isn’t so much about machining as it is about vision – a vision for a cleaner, more sustainable future, investment in our communities and an entirely new paradigm for making things, all of which begins with the microfactory concept. 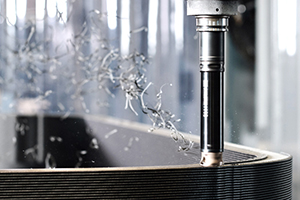 “I grew up in East Tennessee,” says Billy Hughes, Local Motors’ research and development programme director. “We have a culture of community here, and our microfactory in Knoxville partakes in that culture. We use locally sourced components, such as batteries and aluminium substructures whenever possible, and many of our employees are like me: they’re from around here and understand the area. That’s what the local in Local Motors means – to be part of the local community and help the people who live there.”

Microfactories don’t eat up huge tracts of land the way traditional factories do, Hughes explains, but rather they help to revitalize communities by repurposing empty buildings, often turning what was a failed business venture into a vibrant, forward-looking commerce partner and provider of high-paying technical jobs. Microfactories are also far more flexible than their large counterparts; where a typical car or truck takes years to develop and a month or more to build, Local Motors can turn around a customized vehicle in weeks.

We want to connect with and scale to the community, not build massive quantities of products to be shipped off elsewhere

Hughes attributes much of this agility to direct digital manufacturing, or DDM, a technology that includes 3D printing but goes much farther. For instance, the Local Motors design and engineering teams leverage the latest in CAD simulation and other software tools and, according to Hughes, are always on the hunt for better mousetraps. They spent several years developing proprietary, carbon-fibre-reinforced materials so that Olli is both safe and structurally sound. They also collect and analyse data – not only from the manufacturing floor but from the delivered vehicles as well – and use it to continually improve their processes and products.

“We have a lot of creative brainstorming sessions with the team and make decisions based on science and available data,” Hughes says. “For example, we’ll use small-scale printers to create a concept car, then discuss ways to improve it. We’re constantly striving for simplicity of design, which is a big reason our vehicles contain only 40 to 50 parts, instead of several thousand.”

The hardware they use is also cutting edge. The 12-metre-long 3D printer used to produce the Olli contains a milling head, allowing the company to produce a complete chassis with minimal handling and greatly reduced tooling expense. Flexibility like this means that Local Motors can place its microfactories virtually anywhere in the world and use them to serve the community and people-specific needs of the surrounding area.

“It’s about scale,” says Hughes. “We want to connect with and scale to the community, not build massive quantities of products to be shipped off elsewhere. That’s the whole point behind small, nimble plants – they’re able to address the needs of the few. But they’re also about the workers of the future. Manufacturers everywhere are struggling with new technology and with educating people to work in a rapidly evolving digital world. And while they’re still talking about how they might accomplish this, we’re already doing it. That’s the beauty of our concept.”

Local Motors opened its first microfactory in Phoenix, Arizona, nearly a decade ago and expanded to Knoxville, the plant where Hughes and his team work. The company recently opened a demonstration and learning facility in Maryland. Meanwhile, the automaker has its eyes set on the Pacific Northwest, Southern California, Central Europe, Australia and indeed any city willing to embrace an all-electric, autonomous and locally built transport solution.

It’s clear that innovation and partnerships are basic tenets of Local Motors, so no one was surprised when Tim Novikov, one of the company’s advanced manufacturing engineers, reached out to another industry pioneer, Sandvik Coromant, for help with machining a few troublesome features on Olli’s 3D-printed chassis.

Ironically, the tooling provider’s sales engineer, Matt Brazelton, recommended a solution that was also made with additive manufacturing. The combination of complex component features with deep cavities in demanding materials is a typical milling challenge. The long overhangs that these applications require often cause a bottle neck due to vibration problems and related performance issues.

Sandvik Additive Manufacturing, a new division established within Sandvik in 2017, has looked into new ways to tackle this challenge. The result, offered by Sandvik Coromant, is the new light weight CoroMill® 390 milling cutter combined with dampened Silent Tools™ holders.

The main goal was to decrease the weight of the cutter to improve the performance at long overhangs. Several alternatives were available, such as using a lighter material or machining holes in the tool body, but additive manufacturing turned out to offer the optimal solution in this case.

The lightweight CoroMill® 390 milling cutter is the world’s first additively manufactured indexable milling cutter, and it proved to be a huge success for Local Motors. By mounting the ultra-lightweight cutter on one of Sandvik Coromant’s Silent Tool boring bars equipped with a Coromant Capto® quick-change spindle interface, the two were able to reduce the Olli’s machining time by an incredible 95 percent.