Almost 2,000 children in Zambia have been able to return to their school after the local Sandvik office assisted in its refurbishment following a cholera outbreak.

Cholera, an infectious and often fatal bacterial disease usually contracted from infected water supplies, is a common problem in many parts of Zambia. But the outbreak that occurred in 2018 across the country’s urban areas was particularly bad.

The country’s Ministry of Health recommended that all schools close to contain the outbreak. When the closure order was lifted, the Kamitondo Primary School, located in the country’s second city, Kitwe, had to remain closed because of the poor state of the children’s toilet blocks and the unreliable water supply and inadequate sewage system.

Staff at Sandvik Mining and Construction’s head office in Zambia learned that some of the local children were not able to go to school because of this situation. A project team was put in place to help reopen the school and Annie Siwo, Central Africa Wellness Officer at Sandvik, became the project coordinator.

The Kamitondo Primary School is located in a community near the Sandvik head office in Kitwe,” Siwo says. “As part of our corporate social responsibility efforts we try to help the surrounding communities. The aim is to support the communities Sandvik operates in.”

We thought we would never go back to school

“The local authorities couldn’t do the necessary repairs to the Kamitondo Primary School because their resources were limited,” Siwo continues. “So, we supplied funds through our CSR budget. The Ministry of General Education found a contractor that rehabilitated the washrooms, diverted the sewer line into the main local sewer line and supplied a 10,000-liter-capacity water tank with a submersible water pump.”

The project began in January and was completed in March 2018. The school, which has 1,700 students ages 10 through 15, reopened in April. Daniel Banister, Sandvik’s Sales Area Manager for Central Africa, explains why supporting the school was an important project for Sandvik.

“Youth are the future,” he says. “It’s important that we actively assist community projects that are focused on the health and well-being of the younger generation who will potentially become the future leaders of our country and our organizations.”

Kamitondo primary school held an official opening ceremony in February 2019, during which the children sang, danced and performed poetry.

“We thought we would never go back to school,” said ninth grader Ruth Bwalya during the opening ceremony. “Not all days are sunny days. But when we least expected it, Sandvik heard our cry, came along and brought us sunshine. We will definitely maintain the standard that has now been set up by Sandvik and teach our current fellow students and the ones yet to join us to do the same.” 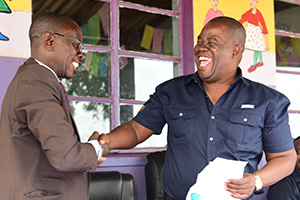 Sandvik plans to continue to help Kamitondo Primary School. “Currently the school only has one computer, which is used by the school headmaster,” says Banister. “We are looking at donating a few computers for the students to use as part of information technology development, and, with the help of our IT department, to train students in basic IT knowledge.”

Going to school is the best start in life there is. Sandvik in India ensures that more children are given such a start.

Helping a neighbor in need

When a rainstorm devastated a local school in rural Ghana, Sandvik helped rebuild it. “We really appreciate the new facility.”