At age 35, New Zealander Andrew Johnson was a successful lawyer, a devoted husband and father, an avid reader and keen water skier. Then out of the blue he was diagnosed with early onset Parkinson’s disease. Eleven years later, Johnson has regained his quality of life thanks to deep brain stimulation surgery and neurostimulation implants.

“It started with a small tremor in my right hand that got worse as I tried to feed my infant son,” Andrew Johnson says, looking back on the year he spent seeing doctors before eventually being diagnosed with early onset idiopathic Parkinson’s disease (PD). His son had just turned 2, and his wife was pregnant with their second child.

“Idiopathic, meaning of no known cause, and early onset, meaning prior to 60 years of age,” he says, adding, “it was a real shock because there was no family history or exposure to environmental toxins, both of which are well-known risk factors.”

About two years after Andrew Johnson got his diagnosis, his neurologist raised the possibility of deep brain stimulation (DBS) surgery.

Not only the elderly

Until his diagnosis, Johnson admits he had thought PD mainly affected elderly people and made them shake.

“It wasn’t until we began reading up on the disease that we realized it’s so much more,” he says.

Originally treated as a motor disorder, PD is now known to affect the entire brain and body, slowly and progressively shutting down the autonomic nervous system, which acts largely unconsciously and regulates bodily functions such as the heart rate, blood pressure and digestion. It can affect anyone from their twenties onwards, impacting a wide range of skills and functions, from cognitive skills to gastrointestinal and motor function, and can cause speech dysfunction, vision changes, pain, urinary and sexual dysfunction, body rigidity, tremors, muscle contractions and cramping, apathy, depression and more. Parkinson’s is among the most common neurological disorders globally, second only to Alzheimer’s disease.

Impacting every facet of life

In the years following the diagnosis, Johnson’s life changed completely. He had to leave his job as Senior Legal Counsel at ASB Bank Limited – one of New Zealand’s “big four” banks – because the cognitive challenges were becoming insurmountable.

“For example, I’d go to a meeting, spend two hours trying to follow the discussions, write copious notes, only to find that my handwriting was so small I couldn’t decipher it, and I couldn’t recall what had been said,” he says. “Wishing to preserve my good reputation, I resigned before making a costly error.”

Micrographia, defined as abnormally small or cramped handwriting, is one of many secondary motor symptoms experienced by some people with PD.

The thing that hurt the most was being unable to be the kind of husband and father I wanted to be.

Johnson struggled to find a treatment that would allow him to live a relatively normal life. At times, he would either be rigid and stuck, unable to move quickly, or flailing wildly around with uncontrolled, involuntary movements known as dyskinesia. He was also experiencing serious motor difficulties and having trouble dressing and feeding himself.

“We eventually moved to a one-level property after I’d fallen down the stairs a couple of times,” he says. “I was so incapacitated that my wife and I agreed I shouldn’t be left alone with our son and daughter, who were then aged 5 and 2. It was rough.”

With the physiological symptoms came the psychological and emotional issues.

“The thing that hurt the most was being unable to be the kind of husband and father I wanted to be, due to the limitations imposed by the ever-changing disease,” says Johnson. “I struggled for a long time with the loss of my identity as a lawyer and being reduced to invalid status.”

“There were some very dark days indeed, but, with professional treatment I managed to get through it,” he says.

Approximately two years after his diagnosis, Johnson’s neurologist raised the possibility of deep brain stimulation (DBS) surgery. While people had previously not been considered for DBS until at least ten years post diagnosis, more recent research indicates that having DBS earlier rather than later may prolong the longevity and efficacy of treatment in early-onset PD.

In 2012, Johnson was approved for DBS surgery and bumped to the top of the list due to the severity of his disease.

There are so many things I can do now that would have been impossible before the surgery.

The neurostimulator can be likened to a pacemaker for the brain.

“DBS surgery was life changing. It gave me control over my body again,” says Johnson. “The way my motor symptoms were going, I think I would have had to be in full-time care if it wasn’t for the DBS. I try to take advantage of the time I have been given and live life like I really mean it.“

Johnson’s children are now 13 and 11 and he spends a lot of time chauffeuring them between activities. He exercises on his own and with specialized neuro-physiotherapists. Being married to a busy executive, he is responsible for cooking and doing the housework. He has read 86 books so far in 2020 – an activity that crucially helps keep his brain active. 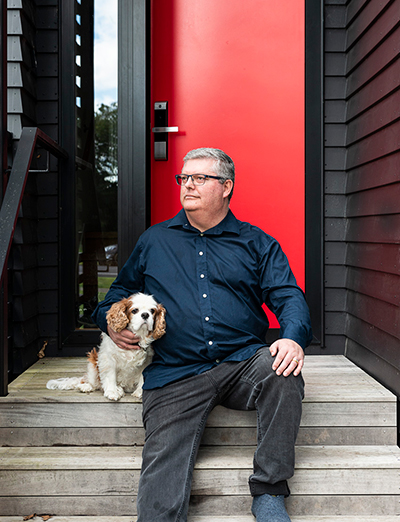 The surgery has made Andrew Johnson aware of how grateful he is for everything he has.“There are so many things I can do now that would have been impossible before the surgery. I can read without my head or hands shaking so much that everything blurred, and I can participate fully in family life – no longer reduced to being a spectator,” he says. “Although I’m still slightly disappointed that I still can’t water ski!”

Grateful for many things

More than anything, Johnson admits the surgery has made him aware of how grateful he is for everything he has, which he says includes close friends, an amazing wife, great kids, a warm place to live, good food and better wine, the New Zealand health system and access to world-class medical treatment.

“I try to focus on the now, and not worry too much about what the future may hold for me. As Michael J. Fox – the famous actor with Parkinson’s disease and founder of the Michael J. Fox Foundation for Parkinson's Research – noted in one of his books about worrying: ‘If it doesn’t happen, you have lived it unnecessarily, if it does happen, you have lived it twice’, he says

Exera® fine medical wire is used across a wide range of medical applications, including modern neurostimulation devices such as those used in Deep Brain Stimulation surgery. This complex procedure has proven to be effective in controlling movement disorders such as those that arise in people suffering from Parkinson’s disease. Exera medical wire and wire components are made from stainless steel, precious metals and Cobalt Chrome alloys and are available with a wide selection of coatings and surface treatments. Sandvik’s Exera medical portfolio includes over 200 alloys and it also offers custom-made alloys.

Curious to find out more?

Exera® fine medical wire is used across a wide range of medical applications, including modern neurostimulation devices such as those used in Deep Brain Stimulation surgery.