Sandvik in prestigious project with CERN

The Globe of Science and Innovation represents the Earth. Photo: CERN

Sandvik has landed an order from CERN, the European Organization for Nuclear Research. With the help of particle accelerators, scientists at CERN are trying to understand how the universe was once created and its fundamental structure.

CERN in Switzerland is regarded as the world’s leading laboratory for particle physics research. The scientists use accelerators where particles are set to collide at the speed of light. 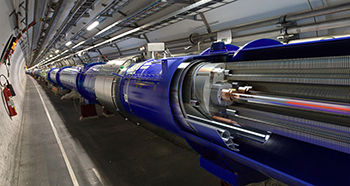 A section of the Large Hadron Collider. Photo: CERN

The Large Hadron Collider (LHC) is the world's largest and most powerful particle collider. In an ongoing upgrade of the LHC, Sandvik material will be used to keep the particle beam in position in the accelerator. The project is CERN’s most extensive during the coming decade, and entails an investment close to 1 billion euros.

“Sandvik is developing a new advanced stainless steel grade of which 475 tons will be delivered to CERN. This is a prestigious order that really shows the value of Sandvik’s material expertise”, says Björn Mogard, Global Product Manager for cold-rolled precision strip material at Sandvik.

The first material will be delivered to CERN by the end of this year.

A goldmine for ideas

How can computer-game developers contribute to Sandvik? To develop digital concepts, we are finding fresh angles to innovation by leading think tanks and co-creating in new ways.

The last bolt replaced on the Vasa ship