The method PrimeTurning™ allows turning in all directions, which eliminates a problem that has haunted the manufacturing industry for years.

True innovations don’t often come along, and when they do they’re usually the result of hard work, knowledge and dedication. The new turning method PrimeTurning™ is one such innovation, and it has the potential to redefine the art of turning completely.

A description of turning typically includes a non-rotary tool removing material as it moves from the end of a rotating component toward the chuck. Skilled turners know that the smaller the lead angle between the cutting edge and the feed direction, the greater the opportunity to increase feed, which translates into higher productivity.

However, a small lead angle prevents the cutting edge from reaching the shoulder and will provide long, curved chips that are difficult to control. The relationship between lead angle and productivity has been an established fact. Until now, that is. 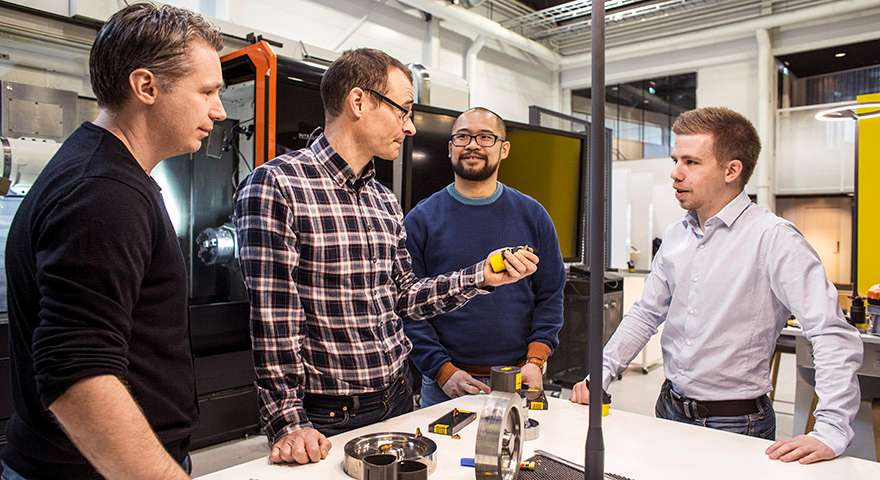 Krister Wikblad, Ronnie Löf, Joe Truong and Adam Johansson at Sandvik Coromant have redefined the art of turning by questioning established facts and acting on their innovative ideas.

When Adam Johansson took his first engineering job in the Sandvik Coromant R&D department in 2012, Ronnie Löf had already worked for the company for almost 20 years. Although the two differed widely in age, expertise and experience, they shared a strong sense of curiosity and the courage to challenge accepted truths.

The two engineers started discussing the lead angle-reach dilemma in late 2012. Before long, a small, far-fetched seed started to germinate, and the discussions became more intense. Their idea was simply to turn backward, from chuck to the end of the component. It would immediately solve the challenge of reaching the shoulder with a small lead angle. Sounds simple? In theory, yes.

“The metal-cutting industry has been removing metal from end to shoulder for centuries,” Johansson says. “Every turning expert can line up impressive amounts of arguments to why the opposite is completely unrealistic.”

The method allows turning in all directions

Chip control is the leading argument, as the small lead angle still provides long, curved chips, regardless of the turning direction. Löf and Johansson set out to solve the issue and succeeded, together with two open-minded and dedicated designers, Joe Truong and Krister Wikblad. When product manager Håkan Ericksson joined the group in 2015, the team members intensified their discussions with colleagues, key customers and other stakeholders to start testing the concept on a larger scale.

Tests have shown that large-scale production of compact components that are securely fastened gives the best results. However, the PrimeTurning™ method allows turning in all directions. This means that vibration-prone parts of a slender component can be turned conventionally, with conventional productivity results – while backward turning is used on stable parts to achieve extraordinary productivity results.

“With productivity improvements of more than 50 percent, better machine utilization and substantially longer tool life, the method PrimeTurning™ has a huge potential,” Löf says. “We still don’t know where this will take us, but after all our tests and customer reactions, I have a really good gut feeling.”