Sandvik signed an agreement to divest the majority of Drilling and Completions (Varel). Several strategic acquisitions, for example within electric battery solutions, wireless connectivity and round tools, were completed. An internal separation of Sandvik Materials Technology within the Sandvik Group was initiated. A greenfield titanium powder plant was inaugurated in Sandviken, Sweden. Stefan Widing was appointed new President and CEO.

Sandvik was recognized as one of the most sustainable companies in the world (Global 100 Most Sustainable Corporations in the World) by Corporate Knights. Sandvik acquired the French metrology software company Metrologic Group and divested its stainless wire business.

Improved profitability and a strong cash flow. The financial targets were achieved ahead of schedule. Divestments of Process Systems and Mining Systems were completed. Agreements to divest the welding wire business and Hyperion were signed. Inclusion in the 2017 Dow Jones Sustainability Index.

Johan Molin was elected new chairman for Sandvik. President Olof Faxander left the company and was succeeded by Björn Rosengren. Sandvik announced the intention to divest its Mining Systems operations, a supplier of material handling systems for the mining industry. Sandvik acquired the Dutch company SGL Technology, a manufacturer of processing equipment for the food production industry.

800 new patents were granted. As a result of efficiency programs, 11 site closures were initiated. Sandvik acquired Varel International Energy Services, thereby strengthening its offering of solutions for a growing energy market. Divestment of a distribution business for stainless steel products in Australia and New Zealand and a power spring business in the US and Mexico, both defined as non-core businesses.

Sandvik was included in the Thomson Reuters’ list of the 100 most innovative companies in the world. The Group was also ranked in the corresponding list in the business magazine Forbes. New research centers were established in India and China. The Group invested in additive manufacturing, 3D printing. Petra Einarsson was appointed head of the Sandvik Materials Technology business area; Sandvik’s first female business area president. Acquisitions of the German company TechnoPartner Samtronic GmbH, the Canadian drilling solutions company Cubex Limited and the outstanding 51% of the shares in Precorp Inc.

Sandvik celebrates its 150th anniversary on 31 January and throughout the year. The divestment of Sandvik Medical Solutions, which was part of the Sandvik Venture business area, was concluded. We became involved in the Swedish project named “Battle of the numbers” with the aim of increasing the number of women in executive positions. Thomson Reuters named us as one of the world’s 100 most innovative companies, a significant acknowledgment of our efforts. Sandvik became owner to 100% of Seco Tools. Because of the weak performance of markets in Europe combined with our continued strong expansion in the rapidly growing regions of the world, for the first time Europe only accounted for about one-third of the Group’s total invoicing. Therefore our sales became more balanced in terms of where growth is taking place. 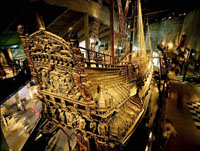 Olof Faxander becomes the new president and CEO of Sandvik on 1 February. A long-term research and development collaboration is initiated with the Vasa Museum in Stockholm, which entails delivery of specially designed stainless steel bolts to preserve the 380-year old ship-of-the-line, Vasa (picture). A joint venture is started with a Chinese company for the production and sale of mining machinery in the Chinese market. Acquisition is made of a company in the crushing and sorting industry in China. A number of substantial supplier agreements are signed in regard to cladding tubes for the nuclear power industry, and are followed by decisions to expand production capacity in Sandviken. A new strategy is established focused on core businesses, growth markets and streamlined internal processes. A new organization with a market focus is decided with more active control of operations. Three business areas become five: Sandvik Mining, Sandvik Machining Solutions, Sandvik Materials Technology, Sandvik Construction and Sandvik Venture. A decision is made to move the group's head office from Sandviken to Stockholm. A process is initiated for divestment of the area within Sandvik MedTech that works with implants and instruments. In November, a recommended public offer was made to the minority shareholders of Seco Tools in order to acquire all remaining shares in that subsidiary. In December, Sandvik held an Extraordinary General Meeting and completed the offer to the minority shareholders of Seco Tools. It was also resolved to transfer the registered office of the Board of Directors from Sandviken to Stockholm..

Anders Nyrén from Industrivärden becomes chairman of the board. Demand increases. Staff on a short working week revert to normal hours. A strategic collaboration is established within metal powder technology with Carpenter Technology. Kanthal is integrated into the new product area, Sandvik Wire and Heating Technology. Major investment in tube production in Chomutov, Czech Republic, and in Sandviken. Large orders for umbilicals to the oil and gas industry and large additional supplier agreements for steam generator tubes to the nuclear power industry. China is now Sandvik's fourth-largest market. Investments in a new production facility in Svedala for crushers and in a new distribution center in Europe for spare parts to the mining and construction industries. Building commences in Newcastle, Australia, of the largest unit thus far for manufacture, assembly, distribution and aftermarket service to the mining industry. Sandvik Coromant develops products for growing industrial segments such as aerospace and wind power.